Lil Meech, the BMF actor and son of Big Meech, has been arrested for grand theft after allegedly stealing a $250,000 Richard Mille watch.

TMZ reports the alleged robbery took place in February, when Lil Meech put down his $80,000 platinum Rolex toward a payment on the new watch at Miami’s Haimov Jewelers. He’s accused of not paying the remaining balance and has since been booked on two counts of first-degree grand theft and a separate count of organized fraud on March 14. 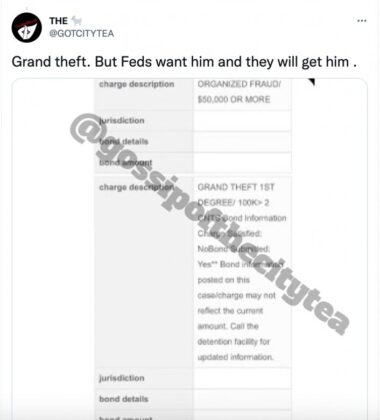 Police also accused Meech of trying to swap the watch for another Richard Millie at a different store, despite not owning it in full. He was reportedly released on bond the day he was arrested.

Charleston White Disrespects Young Thug: “You A Killer & A Punk”