Chrisean Leaks Footage Of Her & Blueface In The Sheets

According to reports, rapper Lil Zay Osama was arrested on Thursday after a machine gun was found in the backseat of an Uber he was inside on his way to a recording studio in New York City.

Authorities say Lil Zay Osama, real name Isaiah Dukes, took the Uber from a hotel in Manhattan to the borough of Queens where he inadvertently left behind the retrofitted firearm. The Uber driver claims to have noticed the weapon when Dukes entered the vehicle and saw that it was still in the car when he dropped off the Chicago rapper in Queens.

The driver subsequently alerted authorities and helped them identify Dukes. Per the New York Post, “the gun Dukes was carrying was a Glock 22.40 caliber pistol that had a “switch” device attached enabling it for rapid fire – like a machine gun.” 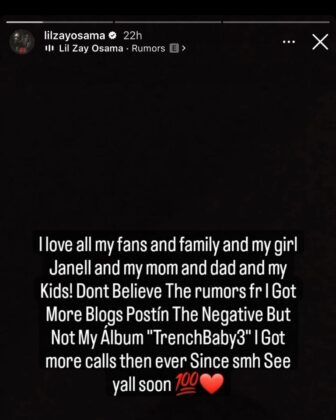 Because of the situation, Zay is reportedly facing up to 20 years in prison after being charged with possession of a machine gun. Since then, Zay Osama has spoken about rumors surrounding the situation.

Via Instagram, Zay said, “I love all my fans and family and my girl Janell and my mom and dad and my kids! Don’t believe the rumors fr.” He continued, “I got more blogs [posting] the negative but not my album ‘TrenchBaby3.’ I got more calls than ever since smh. See y’all soon 💯❤️.” Take a look above.

6ix9ine Spends Over $260,000 On Birkin Bags For Multiple Bottle Girls In NYC