“@laflar107 your man got robbed in the club while performing and got mad and took out his gun for the cameras [sideways crying laughing emoji],” 6ix9ine wrote. “Now his mom lost both her sons one dead the other in jail after getting robbed. Smh she in my prayers.” 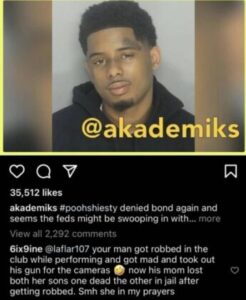 He meant to take Gucci Mane but messed up the tag.

Shiesty was denied bail in connection to the recent alleged shooting at the King of Diamonds nightclub. He allegedly shot security guard Frivin Dor in the ankle. Dor recanted his statement but the authorities seem to think that he may have been pressured into changing his statement.

“This is very concerning to me,” Miami-Dade prosecutor Ruben Scolavino told Circuit Judge Ellen Venzer per the Miami Herald. “Our office is obviously investigating it.”

6ix9ine Spends Over $260,000 On Birkin Bags For Multiple Bottle Girls In NYC