The Rock & Roll Hall of Fame recently revealed their inductees for the class of 2022. Amongst the entire list of award-winning recording artists, producers, and executives, only one rapper was selected this year, Eminem.

Although the Detroit-based emcee has overcome his fair share of racial barriers during the developmental stage of his career, many of his skeptics have been quick to point out the advantages that his skin color has afforded him in the mainstream. Thus, when the major announcement came down the pipeline on Wednesday, his old rival Benzino, couldn’t resist the urge to dredge up deep-rooted race-based resentment towards Eminem. Benzino called into question how deserving he was of such a prestigious honor when there are still so many rappers of color who have yet to have been inducted. The 56-year-old aired out his grievances by indicating that Em’s nomination was largely based on the color of his skin before mentioning a litany of rappers who exceed his old nemesis in terms of seniority in the rap game. 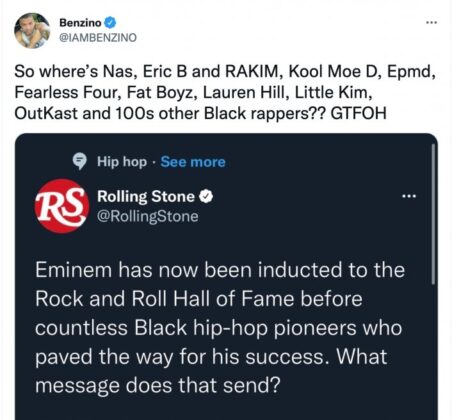 “Rock and roll hall of fame is just like the Grammy’s,” he wrote on Twitter. “They have no respect for our culture, Black or Hip Hop and if you don’t agree, you’re racist, period point blank.”

Charleston White Disrespects Young Thug: “You A Killer & A Punk”